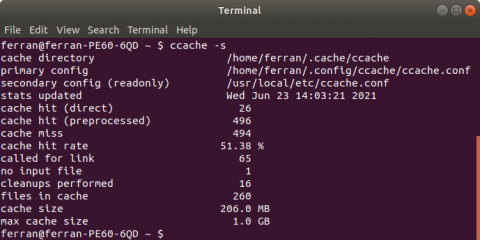 Languages ​​like C++ are still alive, in full development and continue to have their niche in the market with famous multiplatform development environments such as QT or wxWidgets. In these languages ​​the developer performs a real compilation and the result is an executable binary.

Who has not suffered long compilation cycles in large projects, especially when it is necessary to carry out complete compilations of the code or when the software does not have a good organization of headers and dependencies, one of those headers is modified, and create a full build unexpectedly?

In this article I present you CCACHE (4.3 at the time of writing this article), a necessary tool that will allow us to reduce compilation times between 2 and 3 times (depending on the hit rate of the cache). CCACHE acts as an intermediary in the compilation, scanning the source code to detect if there have been real changes using techniques such as comparison of modification dates and hash codes. Binaries are cached compressed using a highly optimized compression algorithm to save disk space.

Information extracted from the official web page, but we will not perform "make install" as we will install it manually:

After the compilation we will have the binary "ccache" in our build folder.

In order for our system to recognize "ccache" we will add the build folder to our system path. This line can be added to ".bashrc" to make it persistent.

Ccache is compatible with the GCC and Clang compilers, it can be used on Windows, Linux and MAC, and although it does not support all compilation flags, it is usable in most cases.

After making ccache available in our path we will use it as follows:

We can also use ccache through CMake by modifying the compiler to use, in the same way as we have done previously. The best way to pass the compiler to CMake is through the environment variables "CC" for the C compiler and "CXX" for the C ++ compiler respectively, before calling cmake:

These commands will help us to configure and to know the status of ccache at any time:

Shows the current statistics of the cache (hits / misses), size, directories where the cache resides and configuration.

Although it is not necessary to clear the cache, since CCACHE recycle the files when they reach the configuration values ​​"max cache size" and will never occupy more than this size, with this option we have the possibility to empty the cache.

Ccache has some default values, but we can override them through its configuration file "ccache.cof" which must be located in the place indicated by the "ccache -s" command. In our case "/home/myuser/.config/ccache/ccache.conf" and if the file does not exist it will have to be created in that location.

Ccache.conf is a plain text file with the format key=value.

In case we have plenty of hard disc and the cache miss rate is high, we can increase the size of the cache by adding the nextlines to the configuration file:

To test that the changes have been applied, just run "ccache -s" again and see how the value has increased from 5 to 10 GB

You can find the full command and option list in CCACHE official docs.